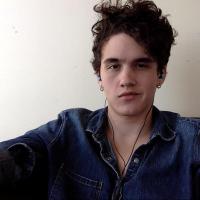 A self-motivated, creative problem solver with a penchant for articulate communication and working well within a team environment.

Ripple (closed source)
Ripple is the video game that started as an endeavor to write code every single day without stopping. I've been working on it for 219 consecutive days (last updated: Jan. 1st 2015).
Written entirely in javascript from the ground up, engine and all, this has been my first foray into game development. Incredibly challenging but fun work.
Since it's a solo project I've done everything from create sprites and animations in photoshop, to write music, and long design documents.
Findie
A website I've created to solve the niche problem of game developers finding jobs.
It will serve as a central place for game developers to display their experience and achievements as well as to search for employment.
Currently in its infant stages. Full javascript stack, written using Angularjs, Mongodb, Express, Browserify, and (soon) React.
Synonymizer
An application that takes a blob of text and converts random words to their closest synonym. Makes use of the Wordnik API.
Also allows a person to look up a word, see the synonyms and see the first image result off Flickr (using their API).
Longest Song
I wrote this site to solve the problem of finding the longest song for a given artist when you only have $1 to put in a jukebox. It makes use of the Discogs.com API. A user can look up an artist, see their albums, and then look up what their longest songs are. Built with AngularJS.
Fargoth's Stump
I'm a huge fan of the Elder Scrolls so I wrote a website to randomly generate content from Morrowind by ripping content from the fansite UESP.net. Angularjs on the front end and Flask for the backend. This was my first experience using Flask, Zurb's Foundation framework, and BeautifulSoup.
Research Project
Designed and built a front end web interface for UMass to serve and display recorded lectures from an automated, intelligent capture system. Project is open source. Utilized a variety of libraries including Angularjs and Popcorn.js.

Don't see what you're looking for?

I've proven myself time and again as a flexible engineer and can pick up new languages, frameworks, technologies in very little time.